This brief is based on research that has been published in a peer-reviewed journal.

Nearly 65 per cent of Canada’s 3,500 organic farms grow cereal crops, including mainly wheat and barley as well as legumes and oilseed crops. The demand for organic small grains is increasing, but one of the challenges in meeting this demand is attributed to the lower yields in organically managed fields than those of conventionally grown grain crops.

The Vancouver Island and south coast regions of British Columbia (BC) have mild temperatures suitable for the planting of cereals as a spring crop. Rainy conditions and relatively poor quality varieties (or cultivars) have given spring grain production a bad reputation among farmers here. Now, however, recently developed or new-to-the-area varieties or cultivars of cereals and grain legumes are available. The potential of these crops have not been well studied in this area, though in one Canadian study maximum yields were higher on organic farms than long-term conventional averages, highlighting the potential for successful organic grain production in Canada.

This research aims to provide organic farmers and producers in this area with the necessary information to make well-informed decisions as to which small grain cultivars to grow under low-input conditions. Low-input farming uses no externally sourced nutrients or synthetic fertilizers. This study was conducted in 2010 to compare heirloom and commercial cultivars of major cereals and grain legumes at the Centre for Sustainable Food Systems at UBC Farm, at the University of British Columbia in Vancouver, BC.

The complete list of cultivars tested can be found at the research article's link included below.

Researchers tested 19 wheat, 17 barley, five pea, five fava bean, five kidney bean, two lentil, and two soybean cultivars. Seeds were cleaned and weighed prior to planting. The plot layout was alternated between wheat, barley and legumes. Cereals were sown using a hand seeder, and legumes were sown by hand. All cultivars were provided with the same level of management. No external fertilizers, pesticides or fungicides were used. Plots were watered with a timed sprinkler irrigation system.

To evaluate plant performance, data were collected for height, number of effective heads, days to harvest, spike length, number of spikes, seeds per spike, seed yield, seed weight, and yield. To evaluate disease resistance, observations were made on the amount of weeds, insect pests, and disease damage (Figure 1). 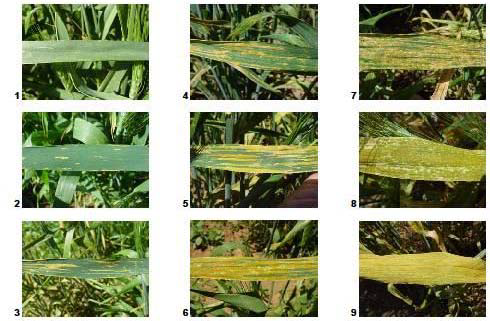 Heirloom and commercial barley cultivars did not differ in plant performance. However, a notable difference was observed in maturity times between hull-less and hulled cultivars, with the hulless-types maturing one to two weeks earlier than the hulled-types. There were significant variations in yield among heirloom barley cultivars.

Pea and lentil yielded lower than the national average under trial conditions. Fava and soybean appeared as promising crops as the cultivars produced good growth and yields. As a seed crop, soybean, fava bean and kidney bean require early planting between late April to early May. Also, lentil appeared to be sensitive to the low temperatures experienced during the end of the season, making them inappropriate for late-spring planting. The variation in plant performance observed between the different legume cultivars reveal great potential for specific cultivars to be effectively used in an intercropping system.

Most of the barley cultivars matured two to four weeks earlier than the wheat cultivars, making barley more appropriate to be integrated with pea and lentil for combined harvesting. Hulless barley showed to be best suited with early pea and lentil, while hulled barley could be integrated with mid to late cultivars. Early wheat cultivars showed possibility with late peas, whereas late wheat appeared to be best suited to fava beans, kidney beans, and soybeans.

This research was part of Dr. Chapagain’s PhD dissertation.

Legumes: Fava and soybean appeared as promising crops as they produced good growth and yields. Variation in legume plant performance reveals potential for an intercropping system where different plants are grown together.

Growing Organic Small Grains in South Coastal BC: Comparing Protein Concentrations in Wheat and Barley
The Vancouver Island and south coast regions of British Columbia (BC) have mild temperatures…

Good Roots: Understanding the Differences Between Heirloom and Commercial Wheat and Barley Roots
The architecture of a plant’s root system has a strong impact on crop performance, and…

Barley–Pea Intercropping: Growing Crops Together to Improve Land Productivity
Growing barley as the sole crop in a field has impacts on land productivity by decreasing soil…

Tensions at the Boundary: What Defines ‘Organic’ Plant Breeding?
Genomic technologies are developing rapidly and continue to impact the food and agriculture…

Legumes: Fava and soybean appeared as promising crops as they produced good growth and yields. Variation in legume plant performance reveals potential for an intercropping system where different plants are grown together.